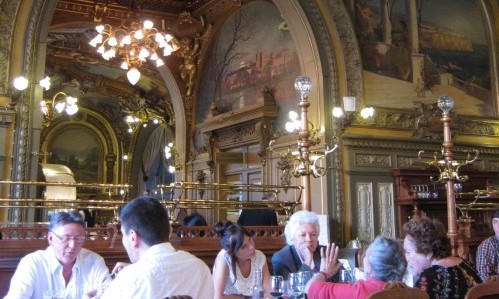 We had a celebratory post-audition dinner at Le Train Bleu, the restaurant that overlooks the train platforms at the Gare de Lyon in Paris. This is one opulent dining room. We’re talking vaulted ceilings, massive banquettes, floral moldings, crystal and gilt everything. We ate very well, the service by the black-tied waiters was friendly and impeccable, and as an added bonus, we were treated to some live entertainment — at the table beside us, a job interview dinner conducted by an authority-oozing business exec where the candidate appeared to be a fourteen year old in a suit (we overhead later that he was 22).

We started with saucisson de Lyon (19) — slices of delicious pork sausage studded with pistachios and wrapped in brioche — and a fresh seasonal salad (12). For mains, we faced some difficult decisions but settled on coeur de filet de boeuf grillé with sauce bernaise and intriguing potatoes confites (39), and the canard en trois recettes (30), which was almost a dead ringer for and almost as good as the “duck three ways” at Rendezvous in Cambridge. The duck confit, roast duck breast and duck sausage were all good, but the tiny turnips (palets de navet fondant) were the surprise highlight. We enjoyed our Graves Château Haut-Selve 2006 Bordeaux (52), which went very well with everything. Though stuffed, the three of us girded our loins to attack an assortment of macarons and a baba au rhum (15) which was accompanied by an entire bottle of Saint James rum for self-application. The espressos were passable, and were served with bite-sized financiers and lemon meringues, incongruously coloured pink.

We’re already planning a return trip to try the tartare de bœuf de race Charolaise (30) that we saw being prepared tableside for our interviewer neighbour, the waiter mixing together the ground beef with olive oil, egg yolk, capers, parsley and onion before shaping it into a neat patty.

Reservations may be made online.

Leacock admin
View all posts by leacock →
This entry was posted in dining out, travels. Bookmark the permalink.