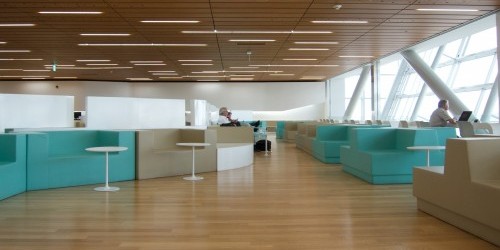 The Korean Air lounge at Incheon International Airport — holy smokes. This is one of the most beautiful, tranquil, calming spaces you could encounter anywhere, much less in one of the busiest and largest airports in the world. A few hours in this lounge and you leave feeling as if you’ve had your chakras realigned. Which you kind of need after the 80 km trek from Seoul city centre, a journey that includes a crossing of the world’s longest self-anchored suspension bridge. The extra-wide “foam” armchairs, large windows onto the tarmac, and swanky washroom (and shower) facilities made for an especially pleasant experience.

While Korean Air is South Korea’s national carrier and largest airline, Asiana Airlines (formerly Seoul Airlines) is widely considered the world’s best airline, and is on Skytrax’s list of 5-star airlines (in order: Asiana Airlines, Quatar Airways, Cathay Pacific Airways, Hainan Airlines, Kingfisher Airlines, Malaysia Airlines, Singapore Airlines). One can only imagine what Asiana’s lounge is like. (Korean Air is considered a 4-star airline. There are 31 of these worldwide, of which only one is North American, probably because most North American airlines have such crappy domestic service. Skytrax also has an elusive 6-star category, which apparently no airline has managed to achieve.)

Incidentally, Incheon has been rated the best airport in the world since 2005, and is one of Skytrax’s three 5-star airports (the others being Hong Kong International and Singapore Changi). Among its fans is Patrick Smith, who described it as “maybe the most efficient, functional and overall flier-friendly airport” he has ever been to, as well as being immaculately clean. About that last point, we noticed a small puddle of spilled coffee as we entered a compartment of the train that runs between terminals. When we pulled into the next terminal stop a few minutes later, there was cleaning staff waiting on the platform at exactly the spot where the compartment door opened to swoop in and deal with the mess.

Leacock admin
View all posts by leacock →
This entry was posted in travels. Bookmark the permalink.