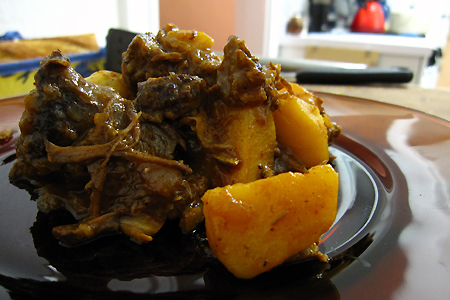 Although the short ribs take donkey’s years to cook, there is really very little to do in making this stew. If you do the braising the day before you plan to eat the stew, it’ll be a quick 45 minutes of cooking on the day of. Alton Brown (whose recipe this one is based on) says something about the fact that when you braise meat (a process that turns the tough collagen into gelatin), you should always let it cool completely and then reheat it before serving. If you eat it right away, it will be soft to the point of mushiness, whereas if you let it cool first, some additional magical chemical transformation occurs to produce a perfectly tender bite. Whatever the reason, it’s true — just try some of the short rib right after the braising step compared to when the stew is done and you’ll see.

Note: This is meant to be made with bone-in short ribs. If there is some dire emergency and you can only find boneless, you should use 1 kg (2.2 lbs) of meat, add about 1/2 cup of water to the marinade, decrease the braising time to 3 hours, and then add another cup or so of water when you put together the stew itself.

Whisk together the tomato paste, lemon juice, Worcestershire sauce, tabasco, paprika and dried herbs in a small bowl and set aside. Lay out a large piece of aluminum foil. You may need to attach two pieces of foil together, in which case you should fold the seam several times to ensure a good seal.

Season the short ribs with the coarse salt. Sear in a hot pan, one or two ribs at a time, until browned all over. Place the seared ribs on the foil, pour the marinade over and smear it around. The marinade is pretty goopy, but it’ll even out during cooking. 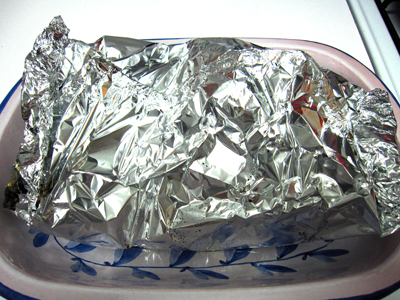 Seal the aluminum foil tightly, but make sure to leave a bit of space for puffing as the ribs cook. Place the packet on a roasting pan in a cold oven, set the temperature to 120C/275F and cook for 4 hours. 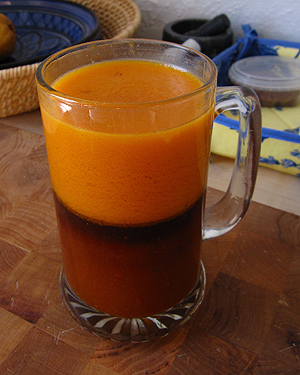 Thinly slice the onion and shallots, and dice the potatoes (unpeeled) into largeish cubes. Remove the reserved braising liquid from the freezer or fridge. A fat puck (in this case, it’s more of a fat piston) will have formed on top of the liquid. Break off about 1 Tbsp of this and place it in a heavy pot or Dutch oven. Wrap up the rest and put it in the freezer for future use. Melt the fat, then sauté the onions with a large pinch of salt. After a few minutes, add the shallots and potatoes and stir to combine. Add some freshly ground pepper and the braising liquid. Bring to a boil, turn the heat down to low, cover and simmer for 20 minutes or so, until the potatoes are tender.

Open the foil packet. Take the meat off the bone and cube into hearty chunks. You can remove the connective tissue, but no need to be too persnickety because this, along with the meat, will soften up when reheated. 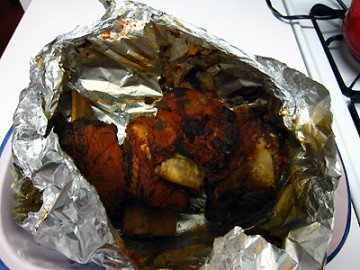 When the potatoes are ready, add the meat , cover again and cook for another 10 minutes. Season to taste, sprinkle with fresh parsley and serve. 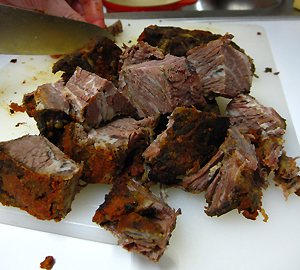 Leacock admin
View all posts by leacock →
This entry was posted in meat, recipe. Bookmark the permalink.